WHY DO LEAVES CHANGE COLOUR AND WHY DO TREES DROP THEIR LEAVES? 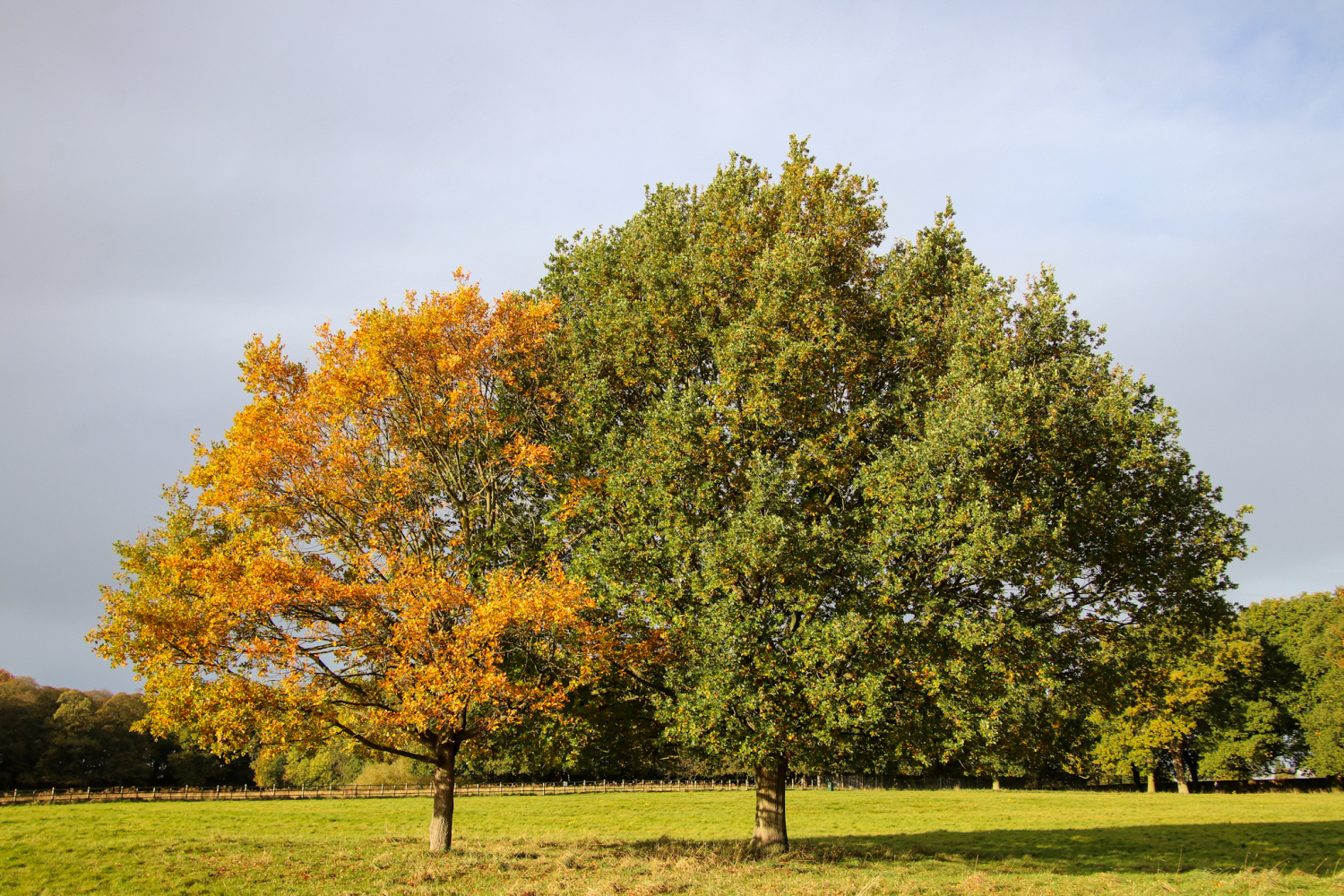 In Autumn, the leaves of our deciduous trees (trees that lose their leaves in winter) start to pale, then turn to yellow, orange and red and start falling to the ground. The colour changing is a beautiful spectacle – but why does it happen?

HOW AND WHY DO DECIDUOUS TREES DROP THEIR LEAVES?

Trees are autotrophic – they produce their own food by using sunlight to convert water and carbon dioxide into nutrients. They collect sunlight via the chlorophyll pigments in their leaves – so how do trees survive the winter, if they have no leaves with which to absorb sunlight to make food? Well, much like a bear or a hedgehog puts on fat for the winter before hibernating (without food) for weeks or months, trees store food too.

During the summer months, trees absorb a lot of sunlight and produce surplus nutrients, which they store in their roots and under their bark. Trees have an amount of storage space for their surplus food that is almost fixed – although the tree does grow year on year, and so have slightly more storage space each year, it’s not able to expand rapidly each year in order to store more food before the winter – the bark of a tree won’t stretch around its stored nutrients in the way that the skin of a hedgehog will stretch around its new fat supplies. This explains why the leaves of trees change colour at different times, giving us a lovely display of multi-colour woodland in autumn: some trees get ‘full’ more quickly than others. Trees like wild cherries fill up their sugar storage earlier than other trees, and their leaves start to turn red as early as September.

But why drop leaves at all? Why not continue to make sugar throughout the winter from the (admittedly less reliable) sunshine? One of the issues trees face is freezing – which is why trees that drop their leaves usually do so before the first hard frost. When wood is wet and freezes it can swell and split open – frozen water takes up more space than liquid water because the water molecules spread further apart. This would seriously damage the tree and make it susceptible to pests and disease. From July, most tree species start to reduce the water content in their wood, and in winter shut down all sugar-production activity to prevent water intake resulting in frost damage – making the presence of leaves somewhat superfluous.

Leaves also act as a place of water loss – water evaporates from the larger surface of the leaves as part of the transpiration process. If trees kept their leaves through the winter (without the protections of evergreen trees – see below), they would be at risk of dying of thirst when they are unable to replace the water lost through evaporation from their leaves with water from their roots because of the ground being frozen.

At a simpler level, shedding leaves and shutting down the photosynthesis process allows the trees to rest. The tree needs to recover from the exertions of a spring and summer spent growing, repairing and creating sugar. Deciduous trees grown inside, with no temperature changes to trigger leaf fall, usually die – they have no opportunity to rest. 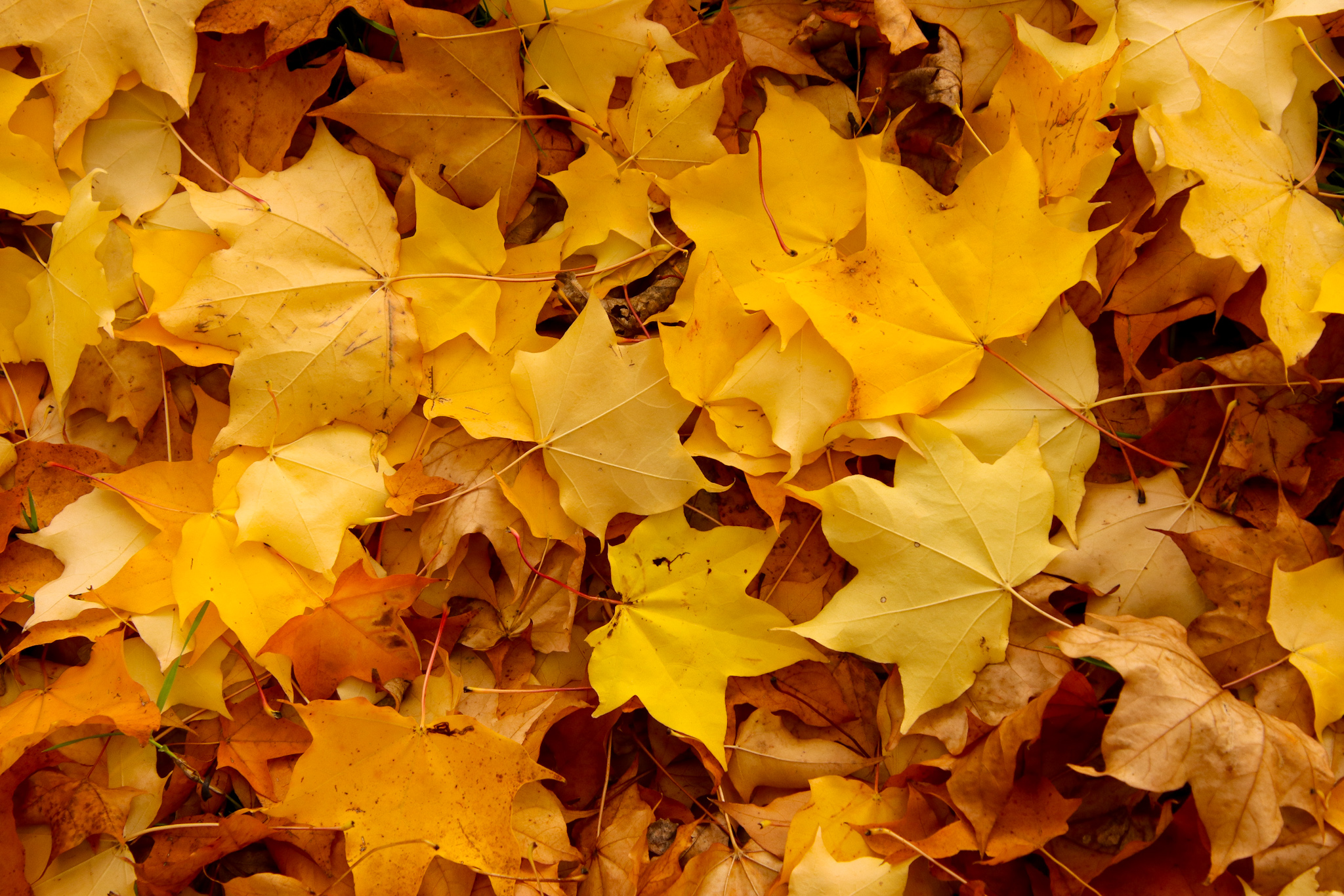 WHY DO THE LEAVES CHANGE COLOUR BEFORE THEY FALL?

Most trees break down chlorophyll into its constituent parts and store it, ready to trot it out again into their new leaves the following spring in order to avoid the energy required to produce all the chlorophyll again. As well as withdrawing chlorophyll, the trees put into their leaves substances that they don’t want as a way of ridding themselves of them before the coming year.

This withdrawal of the green pigment leaves the yellow, orange, red and brown pigments that were there all along underneath, made from carotene and anthocyanins.

Alders, ash and elders are exceptions to the tendency to withdraw and store chlorophyll; they usually live in nutrient-rich soil, so are happy to drop green leaves and reproduce the chlorophyll each year.

As I explained above, some trees like ash drop their leaves while they’re still green – these are the baller trees, unconcerned about throwing away nutrients left right and centre.

Chlorophyll is the key component taken back out of leaves, but the carotene and anthocyanins can also be broken down and reabsorbed if a tree is being particularly tight on the purse strings. Trees like cherry take a middle-ground, reabsorbing the chlorophyll but dropping their leaves when they’re red. Oaks and beech are the real queens of nutrient budgeting – they reabsorb every bit of goodness from their leaves, and don’t drop them until they’re brown.

The beautiful colourful display we see isn’t just due to an absence of chlorophyll. Trees have an active interest in leaving brightly coloured leaves after they’ve withdrawn their chlorophyll. As is the case in respect of many brightly coloured skins in the natural world, the reason for this is to act as a warning signal: to demonstrate to creatures that are looking for winter homes and would harm the tree – such as aphids – that the tree is healthy and robust. The insects see that the tree is healthy enough to produce brightly coloured pigment for its leaves after the removal of the chlorophyll and therefore choose a sicklier-looking, duller tree for their winter residence. 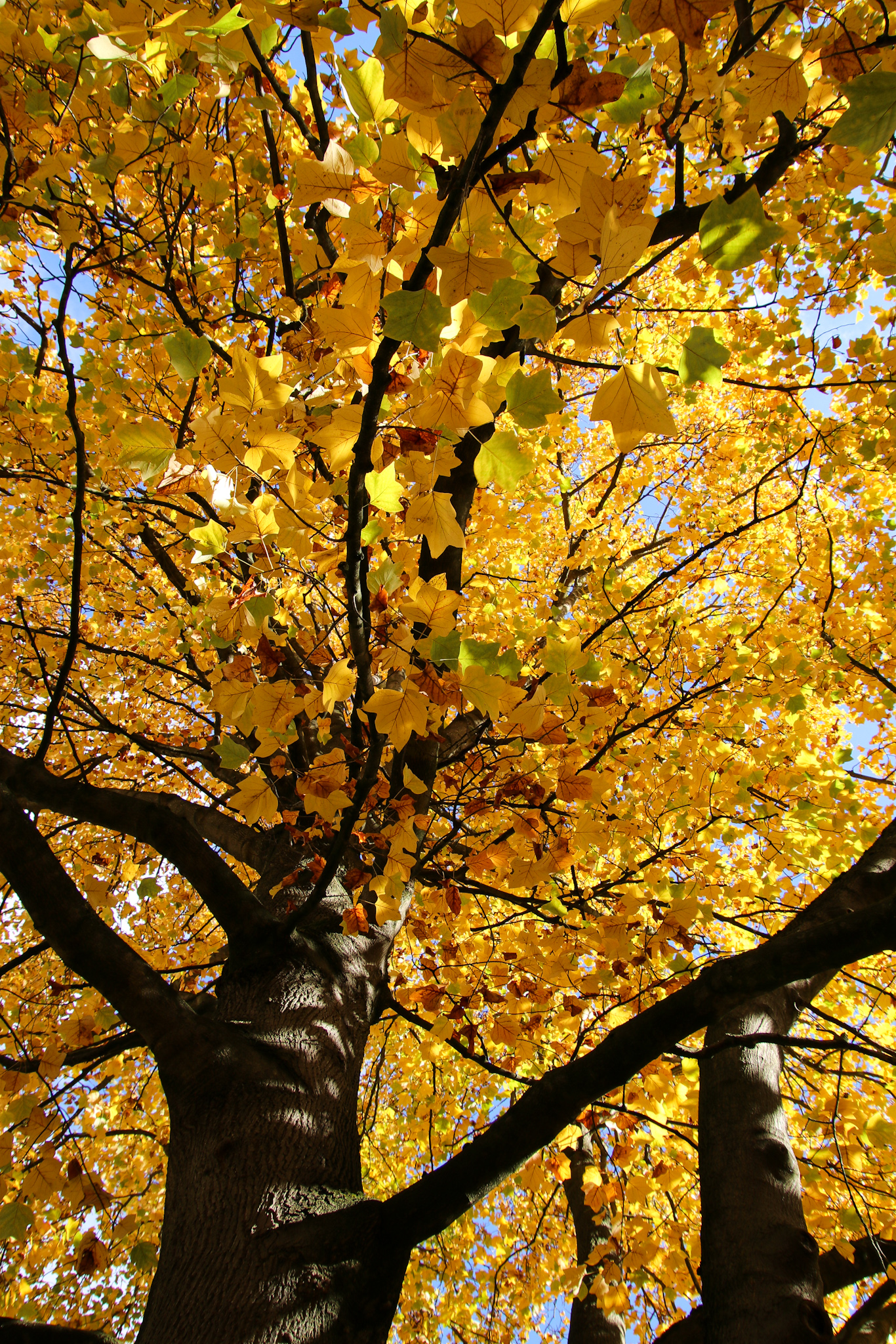 So how do evergreen trees cope? Evergreen trees have a number of adaptations that allow them to go through the winter months without dropping their leaves and growing new ones. Their needles fill with a chemical that acts as anti-freeze, preventing problems caused by expanding water during a frost. To prevent excessive water loss from the leaves, the needles are coated with wax and only have small breathing holes deep on the underside of the needle.

WHO'S THE WINNER: DECIDUOUS OR EVERGREEN?

Peter Wohlleben explains that a key evolutionary benefit of dropping leaves is better survival of storms. Loss of leaves means loss of surface area, which allows deciduous trees to better withstand high winds – particularly important during winter when high winds are more prevalent and when soaked soil gives roots less hold. A related benefit of having a smaller surface area becomes apparent when snow falls; without leaves to pile upon, snow that falls over deciduous trees largely falls to the ground without weighing down the tree’s branches and causing injury. The same goes for ice, which is often capable of wreaking even more damage than snow; deciduous trees survive the ice better than evergreens. 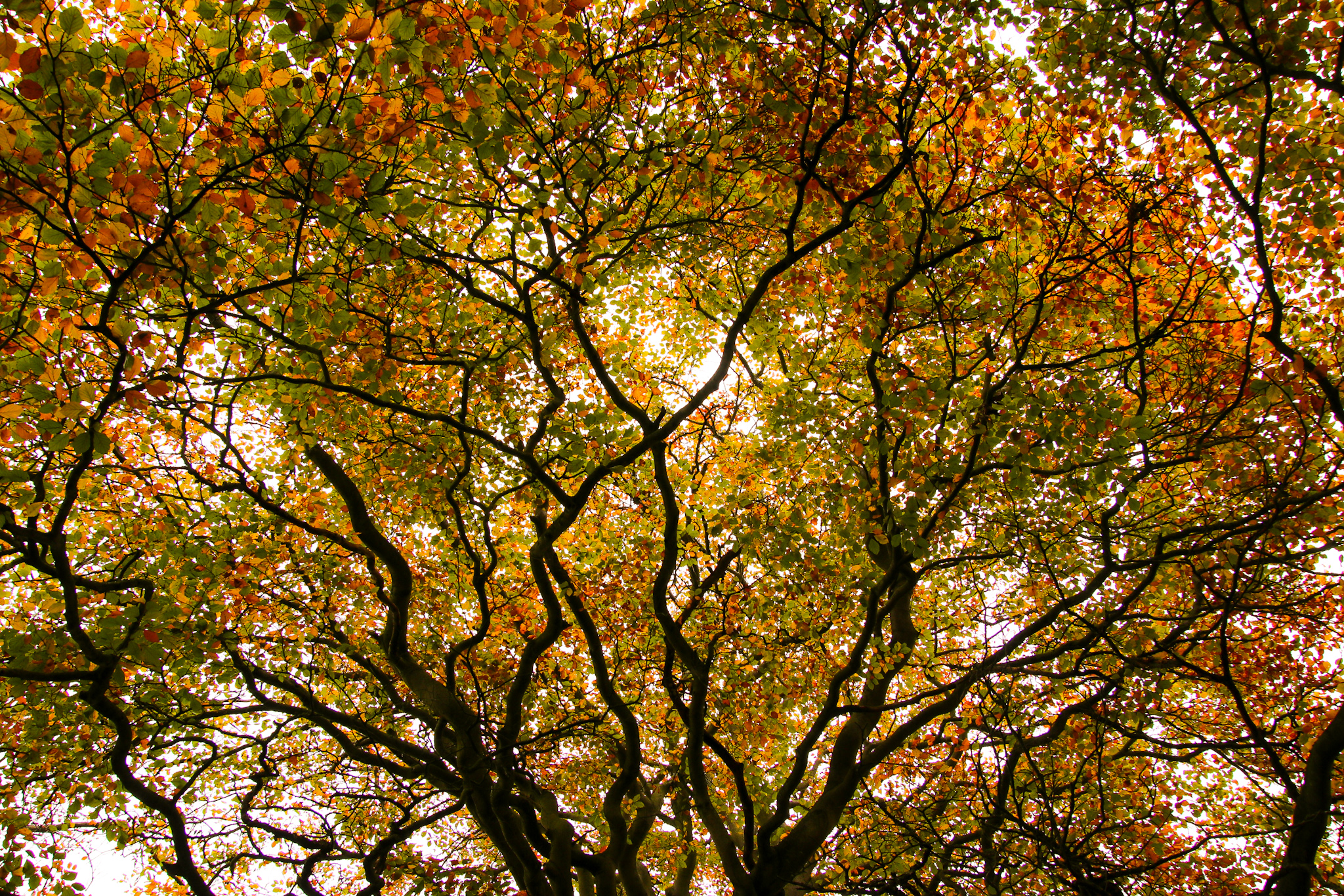