Rewild YourselfWHY DID THE TOAD CROSS THE ROAD? 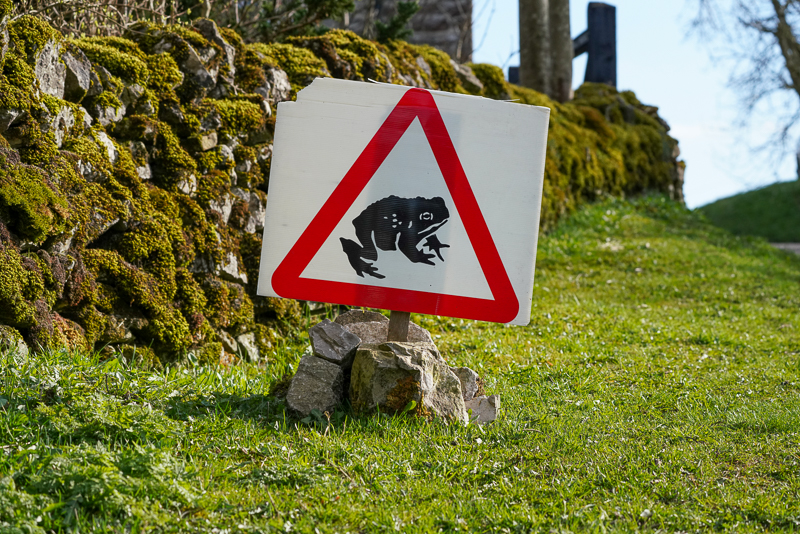 The time we’ve all been waiting for is finally here…baby frog season!

As you venture out over the coming weeks, keep your eyes peeled for movement as tiny frogs and toads make their way around. They’re always lovely to see, but where are they going, and why?

I've given you ten ways to tell the difference between a frog and a toad here.

Spoiler alert: kissing them and waiting to see if they turn into a prince isn't advised.

WHY ARE THEY EVERYWHERE?

Once you start spotting tiny baby frogs or toads, you’ll notice that there are loads. They’re leaving the water where they were born and exiting en masse.

The frogs and toads leave the water when their tails have been fully absorbed, so biologically the tadpoles that grew up together will be ready to leave the water at roughly the same time. Moving as a group also gives them strength in numbers and makes it more likely that they’ll survive without being picked off by a bird or other predator. 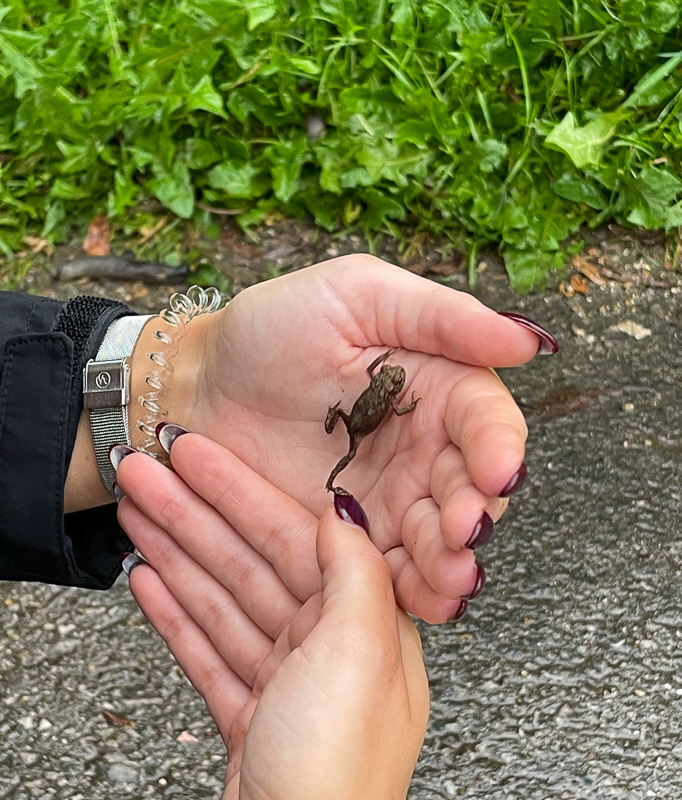 WHY DID THE TOAD CROSS THE ROAD?

Where are these precious little souls off to? Frogs and toads leave the water they were born in during late summer, and head for cool, damp places to chill out until they’re ready to breed themselves in a couple of years’ time.

When the time comes, the toads will return to the pond to lay their spawn. This is why in winter and early spring, adult toads also cross roads - they're returning to their ancestral breeding pond. That's right, they return to the same place every year, like salmon. Frogs are less fussy, which is why you'll sometimes see frogspawn abandoned in a puddle.

Contrary to popular belief, a frog or toad away from water isn’t necessarily in danger; they spend much of the year out of water, but stay in damp places. Toads are more tolerant of dry conditions than frogs, so you may see them even further away from a pond.

Toads use the same routes each year to return to their breeding pond once they're at adult age, so this - coupled with the fact that they stray further from the water than frogs - means they're more at risk of predation (or being squashed by cars).

Let me share with you a delightful passage from Edward Step's 1946 Animal Life of the British Isles:

When all the tadpoles have become real little Frogs, with their legs sufficiently firm to enable them to engage in hopping exercises, they still for a time venture no further than the very shallow water at the extreme edge of the pond, where they can walk partially submerged. Then one day there comes a heavy summer rainstorm - a deluge on a smaller scale. Every little Frog then appears to hear the word "Go!" for with one impulse they all scramble out of the pond into the jungle of wet grass, they know not whither. If there is a road near, that is the place in which to form an idea of their prodigious numbers. The few wayfarers who may be hurrying along that road, looking for shelter from the pitiless rain, and seeing the Frogs hopping along much as the raindrops bounce, are quite prepared to declare that they came down from the clouds with the rain. 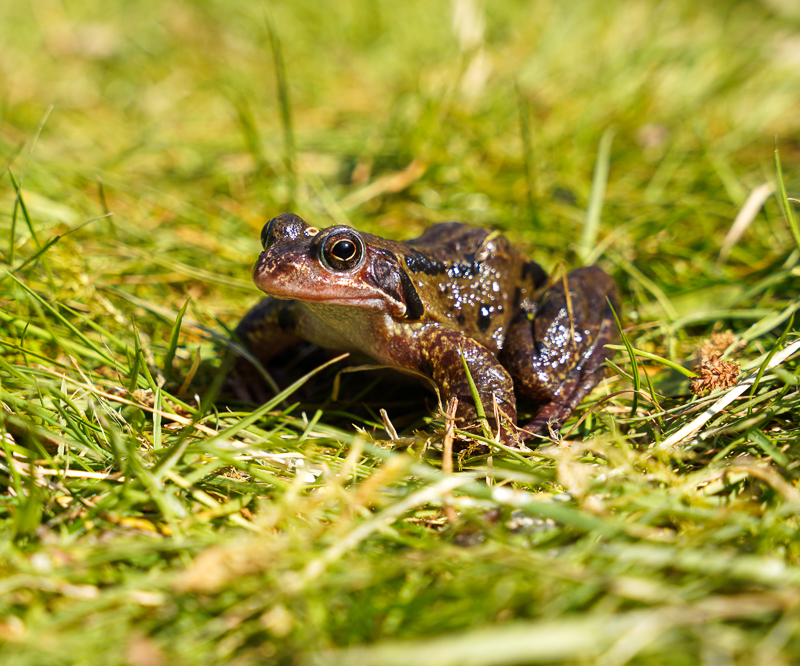 WHAT YOU CAN DO TO HELP

Happily, most of the time, frogs and toads don’t need our help!

If you see frogs or toads making their way away from the water, and they look healthy (and usually determined), please don’t pick them up and put them back in the pond; remember that amphibians spend much of their life out of the water – that’s why their anatomy allows them to breathe oxygen from the water and the air.

If frogs or toads are travelling across a path, be very careful not to stand on one. You may wish to make others aware or watch over them until all of the babies have made it across to the other side. If you see lots of toads following a particular route, it's worthwhile contacting your local council or wildlife group to see if signs can be installed to warn drivers, or toad patrols set up.

Where main roads cut through the travel routes of toads, local groups often run rescue missions to collect them and save them from being squashed. You can get more information about toad patrols and sign up here. If you handle them, don’t forget to wash your hands regularly and keep your hands low to the ground when holding an amphibian (or any other non-flying animal) so that if the animal falls it’s less likely to be injured.

Building a wildlife pond is a great way to help frogs and toads. Remember not to move spawn or amphibians; they'll come to you in no time, don't worry!

Most of all, enjoy watching these tiny troopers taking their first trip into the big wide world! 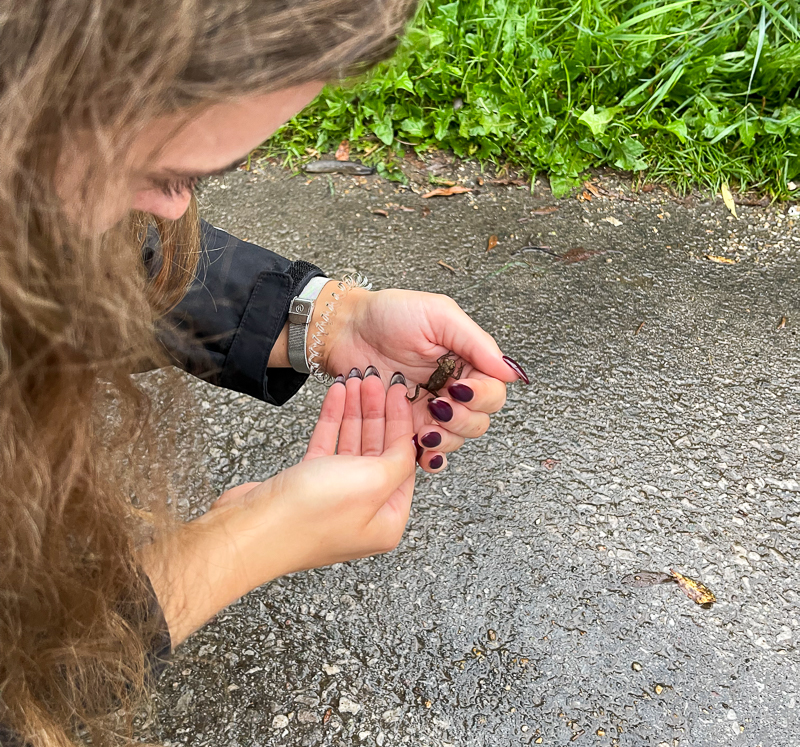 I hate to ruin the mood, but I need to mention ranavirus. I've written about this disease and how to prevent its spread here.

If you see an amphibian that you suspect has or had ranavirus, please report it here.