HEDGEHOGS: GET TO KNOW THEM BEFORE THEY GO EXTINCT 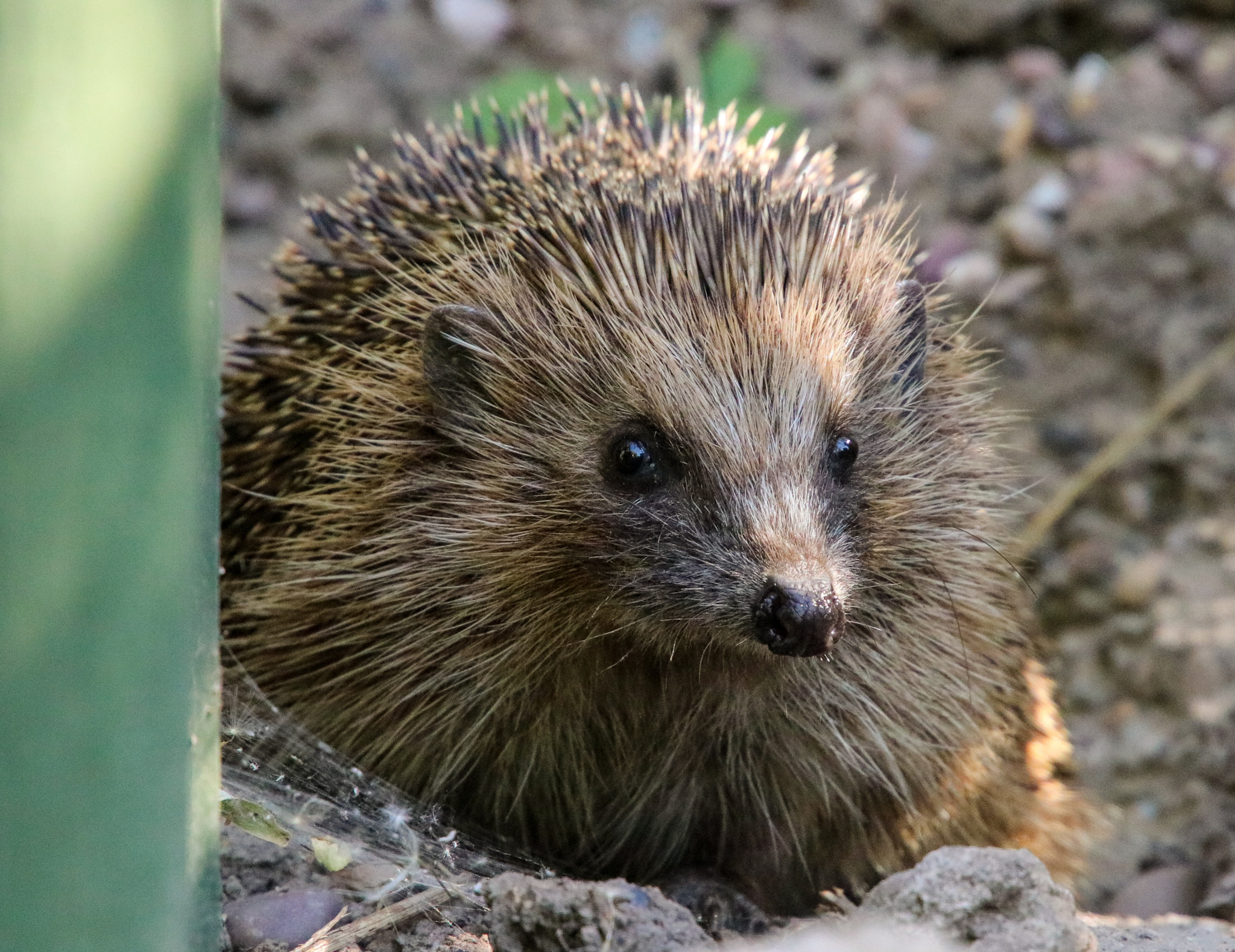 Benedict Macdonald has referred, heartbreakingly, to hedgehogs ‘snuffling out of our lives’. They declined in number by 29 million between the 1950s and 1990s to just 1 million individuals. In the last 13 years, we’ve lost another 66% of them. Hedgehog numbers are dropping by a fifth every four years, meaning they’re set for extinction in the UK by 2025.

Hedgehogs are an indicator species – often referred to as a canary in the coal mine, meaning problems with their population numbers indicate likely problems with other populations, especially the populations of the invertebrates that they eat. We need to protect hedgehogs, and this article provides an insight into their lives. I’ll do another post about how you can help hedgehogs.

WHAT DO WE CALL THEM?

The hedgehog’s Latin name is Erinaceus europeus, but it has lots of other (cuter) names. My family affectionately call them prickle bears, although I’m not sure of the origin of the phrase (a Google search reveals nothing, suggesting we might have made it up from nowhere, which is even cuter, if taxonomically misleading). In the Tempest, Shakespeare calls them urchins:

For this, be sure, to-night thou shalt have cramps,

Side-stitches that shall pen thy breach up; urchins

Shall, for that vast of night that they may work,

All exercise on thee; thou shall be pinch’d…

The Tempest, Act 1 Scene 1, spoken by Prospero to Calbain, to which Calbain responds in Scene II ‘but they’ll nor pinch/Fright me with urchin’.

He refers to them as ‘hedgepigs’ (later translated as hedgehogs) in A Midsummer Night’s Dream.

The urchins are used as a threat in The Tempest and the fairies in A Midsummer Night’s Dream ask that the ‘thorny hedgepigs be not seen’ but in modern times we feel much more affectionately towards them – hedgehog rehabilitation centres have popped up all over the country, and a poll by the Royal Society of Biology ranked the hedgehog a runaway winner as the UK’s favourite mammal. In old Sussex, hedgehogs are called ‘prickleback urchins’ and the Irish word is gainneog, but we don’t talk about that one (it means ‘ugly little thing’ – presumably whoever came up with this name had never actually seen a hedgehog, or was dead inside). Mrs Tiggy-Winkle is an adorable homely hedgehog that, in Beatrix Potter’s world, lives in the Lake District and has tea with a little girl called Lucie.

I’ll call them hedgehogs or hedgies.

It’s tempting to assume that hedgehogs belong to a group of ‘spiky animals’ and must be in the same family as animals like porcupines and echidnas, but this isn’t the case. Hedgehogs actually have few close relatives, and belong to a group (an order) called Insectivora, which includes hedgehogs, shrews, moles, and moonrats (an interesting creature that looks like a cross between a rat and a possum – but is not closely related to either).

Indisputably up there as one of the cutest animals of all time, hedgehogs are small, spiny mammals that roll up into a ball when threatened. They have a pointed little brown face, with a black nose and small black eyes. They’re about 35cm long when they’re not curled up. 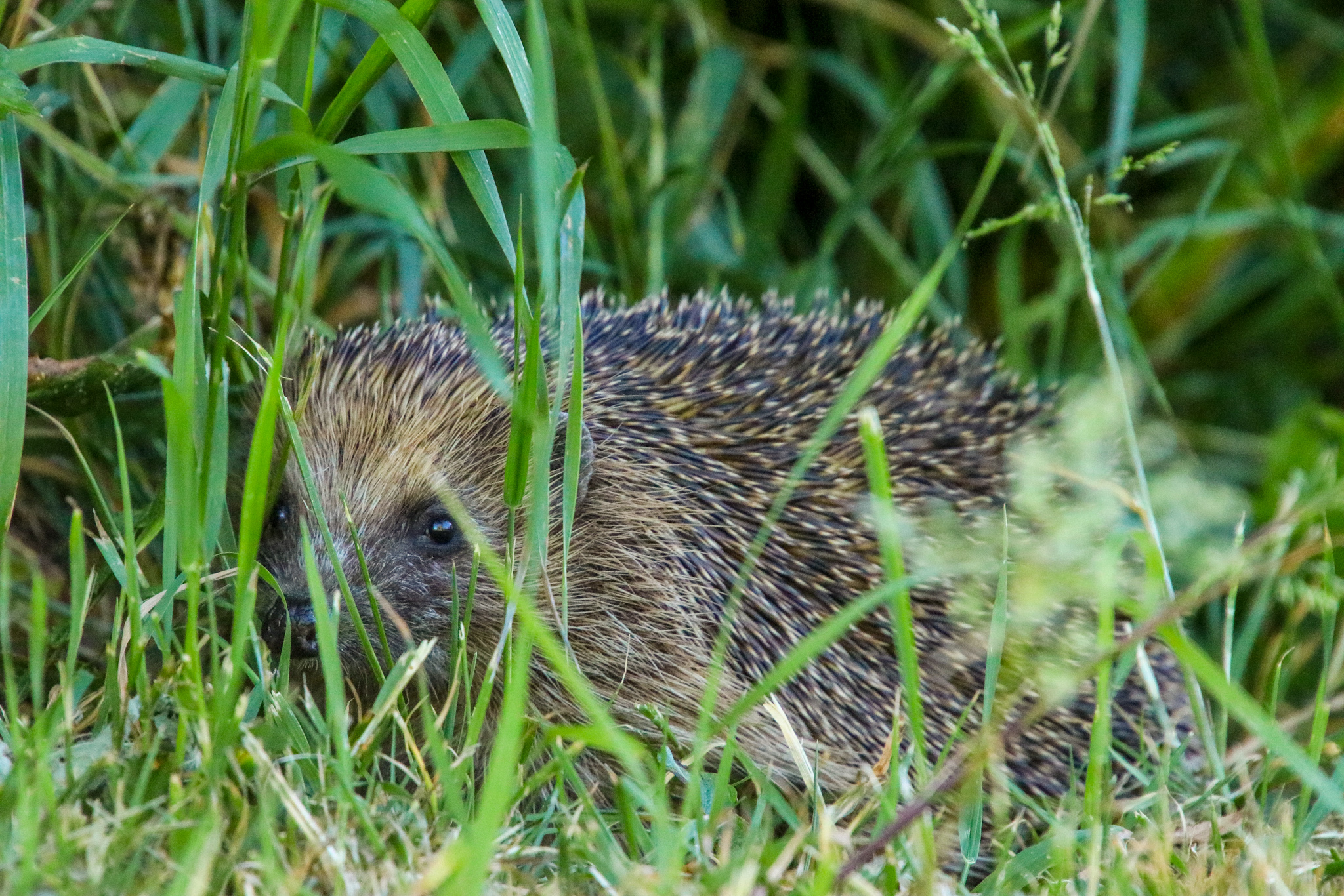 HOW DO HEDGEHOGS MOVE AROUND?

There seems to be a misconception that hedgehogs are sleepy, overly steady animals, plodding slowly around our countryside in a daze. When they’re up and about, they are usually purposeful and can be quite speedy. That said, they don’t tend to sprint about like other small mammals such as shrews and mice. If you see one in the evening or early morning you’re likely to be able to watch it ambling along rather than merely catching a glimpse as it skitters away. This is probably because hedgies don’t really need to rush around – they have few natural predators (badgers being their only real natural threat in the UK) and they have strong defences (their spines), so aren’t as concerned about staying in one place or being out in the open as other small mammals are.

Hedgehogs tend to walk with a bit of a lolloping gait; it’s very endearing and reminds me of a power walker rolling their hips to walk as fast as possible without breaking into a run (or a British person running for the bus). I think of them as doing their best to be speedy whilst going about their nightly business in a body not quite cut out for scampering and running. Dave Goulson has described their gait as ‘reminiscent of an old man with a gammy hip on the way back from the pub’ which is not particularly poetic or romantic but is nonetheless rather accurate.

WHAT DO HEDGEHOGS EAT?

Hedgies can eat more than 100 invertebrates in a single night – and because some of their favourites, like slugs, are considered to be ‘pests’ by many gardeners, hedgehogs should be welcomed by gardeners and allotment-keepers.

DO HEDGEHOGS HAVE TERRITORIES?

The short answer is no – hedgehogs are not territorial.

Hedgies have an average ‘home range’ or area of operation of around 25 hectares (60 acres) for males and 10 hectares (25 acres) for females. This means that hedgehogs that visit your garden don’t necessarily nest close by, but it doesn’t mean that you always see the same individuals; because hedgehogs aren’t territorial, their areas of operation often overlap, and you end up with several hedgehogs feeding in the same area.

HOW LONG DO HEDGEHOGS LIVE FOR?

Hedgies live for an average of two years after they leave the nest.

HOW DO HEDGEHOGS ROLL UP?

When hedgies roll up, it looks like they’re just bending their head down and curling their bottom in – much like if a human adopts the foetal position, but this observation doesn’t do justice to the adaptation of hedgehogs.

Hedgies have quite baggy skin (that’s why they can squeeze through holes that look much smaller than them) and this skin contains special muscles. A pair of those muscles allows the hedgehog to pull its skin down over its head, and another pair allow it to pull its skin down over its bottom. Around the edge of its skin, there is a circular muscle that operates like a drawstring to pull the skin tight around the bottom of a hedgehog’s body. This leaves the hedgehog entirely covered by its spiny skin, with no vulnerabilities on show.

If a hedgehog is seriously threatened, it can also move its spines. Each spine has a fleshy base below the skin, and this base contains a muscle which allows the hedgie to erect its spines in all kinds of directions. The different directions of the spines make it more difficult for a predator to get to the hedgehog’s skin or body than when the spines are straight.

Yes, hedgehogs usually hibernate between November and February, emerging in March. Hibernation is variable though – it is a response to decreases in food sources due to the falling temperatures of winter. If the temperature is milder than usual, or there is an abundance of food, the hedgehogs may hibernate for a shorter period of time.

The aim of hibernation is to conserve energy whilst food is harder to come by and keeping up the body temperature required for usual activities is more difficult. You’ll often see 600 g quoted as a healthy weight for a hedgehog going into hibernation, and that’s because hibernation uses up the reserves of the hedgehog’s body, so they need to have enough to get them through until the warmer winter months.

All of the above means that if you discover a ‘dead’ hedgehog, you might be looking at a hedgehog in hibernation. Hedgehogs in hibernation will be very still and very, very cold. If you do find them towards the end of their hibernation they may also look undernourished. If you discover a hedgehog that looks dead, unless it has categorically moved onto some higher place (i.e. visibly decomposing or stinks to high heaven), re-cover it with whatever it was underneath before you discovered it and leave it well alone.

WHEN DO HEDGEHOGS HAVE BABIES?

Hedgehogs, like most mammals, give birth to live young which are dependant upon the mother whilst they feed on milk. Hedgehog breeding season is April to September, and the gestation period (the length of the female’s pregnancy) is around four and a half weeks.

Hedgies don’t pair bond, and the male hedgehog doesn’t stick around to help care for the young, so if you see a family it will be the female and her children.

The average family size for hedgehogs is four or five hoglets, although one in five don’t make it out of the nest.

HOW TO HELP HEDGEHOGS

Look out for my next posts on how to watch hedgies in your garden, dangers to hedgies, and how to help them back from the brink.

Potter, B., 1905. The Tale Of The Mrs. Tiggy-Winkle. London: Frederick Warne. For the present purpose I’m ignoring the sexist gender roles encompassed by the story, where a young girl stops for tea with Mrs Tiggy-Winkle and helps her to deliver the laundry to the other animals – thought to appeal to young girls, with a focus on indoor housework.

Pat Morris warns against ‘rescuing’ hedgehogs that are under 600 g before hibernation, as this could result in unnecessary interference as studies have shown that wild hedgehogs can survive hibernation with body masses from 450 g: Morris, P., 2015. Hedgehogs. Stansted: Whittet Books, p131.