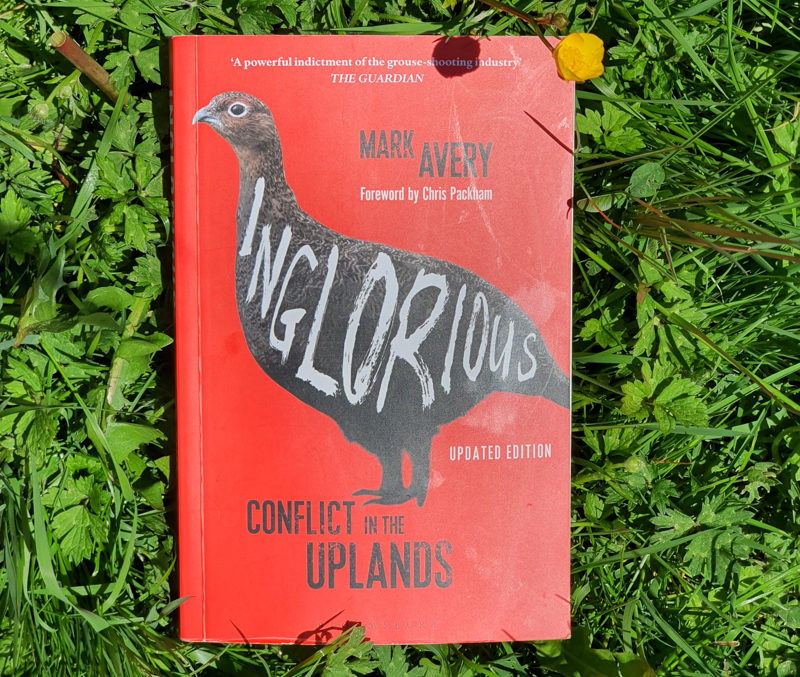 Driven grouse shooting and the land management practices associated with it negatively affect our biodiversity, our flood risk, our carbon storage, and our climate. In the grand scheme of things, despite taking up a lot of our land, grouse moors contribute very little to our economy, create very few jobs, and are enjoyed by the few, not the many.

The answer, says Avery, is an outright ban on driven grouse shooting. He convincingly argues that such a ban would inconvenience very few people and benefit most of us who live in England. Avery’s argument is detailed and comprehensive, but it centres around one charismatic bird: the hen harrier.

Productivity and survival of these majestic birds of prey on grouse moors is so low that the moors act as a sink for the population. The birds have low natal fidelity and high natal dispersal – they don’t stay close to home after they fledge, and they often don’t nest anywhere near where they were born. When a young hen harrier is perusing the landscape looking for somewhere to feed and nest, it’s likely to be attracted to grouse moors because of the artificially high density of red grouse chicks.

It feels like one of those bell-shaped wasp traps that have a reservoir for something sweet to lure the wasps to their deaths. Hen harriers often meet their untimely end when they enter the honeypot of the grouse moor. And grouse moors aren’t just honeypots for hen harriers: they’re sinks for taxpayer cash too. Grouse moors receive subsidies from the government (something Guy Shrubsole covers in Who Owns England?) so not only do their owners not pay for the environmental harms that their land management causes, they’re actually paid by us when they inflict those harms.

Avery’s writing is convincing because it is well-evidenced, eloquent, and emotive, but it’s especially engaging because he utilises some literary techniques that I haven’t seen before in this genre.

The book broadly follows the structure you’d expect of an argument for a ban on driven grouse shooting: a history of the hen harrier that makes you fall in love, a brief dive into the location, ownership and practices of grouse moors, a return to hen harriers and their persecution, and then an explanation of the arguments on both sides plus the current position.

What makes this book stand out is how unbelievably helpful it is. Avery has identified the issues that sometimes prevail when reading these sorts of books and addressed them perfectly.

It’s sometimes difficult to pick out or remember the key points of a chapter filled with facts and figures – Avery’s bullet lists of key takeaways see to this. It’s often hard to imagine how it could look if the author’s suggestions were implemented; what’s the vision on the other side? Avery shows us what could be by writing a chapter looking back from an imagined future where driven grouse shooting is banned. On the fence about banning driven grouse shooting, but not quite able to articulate why you can’t get on board? Avery shows us, by recreating a conversation with himself, why most arguments against an outright ban don’t hold water.

For me, the most helpful and engaging aspect of the book is the way that Avery takes the reader through the history of the grouse moor debate. If you’ve ever tried to trace a conservation issue back yourself, you’ll know how painfully difficult it is trying to piece together historic government reports, news stories and scientific studies. Even when someone writes a book on the topic, it’s not uncommon for authors (necessarily very familiar with the timeline and so blind to how difficult it is to follow) to flit about between dates and reports, and skim over events – leaving the reader disconnected or confused.

This isn’t the case with Inglorious. Avery takes us through the events in order by year. Not only that, he includes quotes from relevant documents and reports so that we get a real feel for the thinking at the time. The inclusion of copies of internal emails relating to the persecution of hen harriers, excerpts from the websites of organisations like the Moorland Association, and of the conservation charities’ responses to such events make reading this book like watching a Netflix crime documentary: accessible, addictive, and unputdownable.

Who knew a history of a conservation debate could be so thrilling?

Have you read this book? How did you find it? Let’s chat about it! Links to socials below.

Sometimes kingfishers are blue and sometimes they're green...how do they do it?

An introduction to our ground nesting birds, and what you can do to keep them safe.